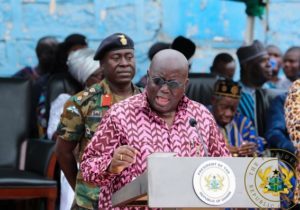 The Team which is made up of medical practitioners who are members of the ruling New Patriotic Party(NPP) has observed with pride the new trends of politics and governance which the Nana Addo led NPP Government has introduced to the political terrain of this country.

Speaking in an interview with Fred Okyere is an executive member of the group, they believe effort and works made by the President and his team is an unprecedented one and must be acknowledged.

In less than one year the government has been able to bring to live most of the promises they made during their campaign Mr Okyere added.

He says almost every promise made by the party during its campaign trail prior to the 2016 general elections has been fulfilled. Sitting an examples on such, Fred Okyere made mention the curtail of power outages(dumsor), restoration of nursing trainee allowance, free SHS and several others and believes fulfilment of the promises have made them proud as they are not ashamed to go back to institutions where they had campaigned for the party to boost of themselves and the NPP .

The NPP Medical Team would like to congratulate H.E Nana Addo Dankwah Akuffo Addo for his Oseade3yo attitude and governance so far.

The NPP Medical Team has observed with pride the new trends of politics and governance which the Nana Addo led NPP Government has introduced to the political terrain of this country.

In less than one year the government has been able to among other things:

*Make our ports and harbours paperless*

The NPP medical team wish to isolate *the restoration of nurses allowance* amongst the myriads of fulfilled promises to express our gratitude to Oseade3yo Nana Addo Dankwa AkuffoA ddo for bringing back  the smiles that comes with allowance to the faces of student Nurses and Midwives and thereby giving such a huge relief to the parents and guardians of these noble profession. We will like to appeal to the naysayers(NDC) to leave their offices and media stations and go to the various Nursing and Midwifery institutions and explain to them what they perceive to be bad about this allowance restoration and compare it to the cancellation during their era of governance . For us we know the import of this allowance restoration and would hereby advice the students to take their education serious, learn from this gesture of the President and be sensitive to the plights of the patients they would attend to when they graduate. They should know the Government has placed a lot of premium on their training and they should take advantage of it to study hard and come out as the best Nurses and Midwives that world can be proud of.

Nana we say thank you for making us proud and be able to go back to these institutions where we campaigned chest out and our heads high.

GOVERNMENT WILL CONTINUE TO USE SOCIAL INTERVENTIONS TO REDUCE POVERTY

NDC to re-introduce manual registration for all members