The Minister for Finance, Ken Ofori Atta, is expected to present the 2018 budget statement and fiscal policy in Parliament today in which he will be seeking approval to spend some GH¢61 billion.

The 17.5 percent VAT/NHIL on domestic airline tickets and levies imposed on kayayei by local authorities were also removed.

The 2018 budget will capture the major economic policies of government on how to speed up the country’s economic growth and consolidate the gains made in the 2017 ‘Asempa’ budget.

Ahead of the presentation, President Nana Addo Dankwa Akufo Addo has hinted that the budget will announce significant electricity tariff review and reduction to help boost the industrial sector.

He has also assured Ghanaians that the budget will create more jobs for the teeming youth in the country.

Minority spokesperson on Finance, Casiel Ato Forson, however, says the budget will not create jobs because the private sector is so distressed. According to him, commercial banks do not have the needed liquidity to lend to the private sector; the government was implementing austerity measures, while the Central Bank had been mandated to pursue a tight monetary policy.

Meanwhile, some economists have cautioned against ambitious oil revenue projection saying, the previous experiences must serve as a guide to government as Ghana has no control over the price of oil.

Can the 2018 budget stimulate growth? Stay with us as we bring you live updates from Parliament.

-One District One Factory GH¢40 million

-We will massively deliver on jobs this year – Ofori-Atta

-Government to review the sources of funding of the NHIS to increase the revenue flow into the Fund.

-We promised to establish three development authorities, and we have delivered – Ofori Atta

-As Finance Minister lists achievements of the NPP government, the Minority heckles him again

-Gov’t aims to reduce the cost of local currency mortgage offered by banks and to encourage the use of technology to lower the cost of housing by the private sector.

-We promised to reduce taxes, and we have delivered – Ofori Atta

-We promised to restore nursing training allowances, and we have delivered – Ofori Atta

-Government has started a process of setting up a broader Informal Sector Pension Scheme under the third tier of the National Pension Scheme to cover cocoa farmers among others. framework to operationalise the scheme will be developed in 2018.

-Gov’t to initiate reforms to the investment guidelines of pensions, insurance and collective investment schemes to enable them support capital market growth.

-The Government to strengthen the pensions, insurance and securities industries, which are the key agents of providing long term capital for the economy.the government of President Akufo-Addo is a government which delivers on its promises – Ofori-Atta

-“access to long-term funds by the private sector is not sufficient to drive accelerated economic growth of the country.” Ken Ofori-Atta

-In 2018, the Ministry will work with GET FUND to set up an education fund to enable Ghanaians make voluntary contributions to support education – Finance Minister

-With the successful launch of the Free SHS, Government has received proposals from the public, several of which encourage the establishment of a fund to receive voluntary contributions to support education – Finance Minister

-Gov’t to launch a national development bank, with the capacity to mobilize private capital towards agricultural and industrial transformation 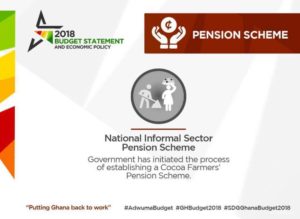 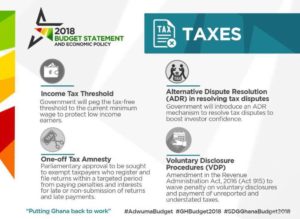 -7.5% income tax on the commission of lotto marketing companies will be abolished and the 5% withholding tax on lotto prizes removed.

-Government will abolish income tax on the incomes of minimum wage earners. 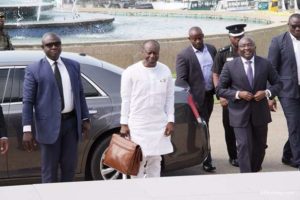 -To remove the incentives for people to engage in illegal lottery, the 7.5% income tax on the commission of lotto marketing will be abolished – Finance Minister

-Government will, through the NEIP, grant tax holidays based on the number of persons employed by a start-up or early-stage business – Finance Minister

-GRA to collaborate with the Ministry of Local Government and Rural Development (MLGRD) to support the MMDAs in the assessment and collection of property taxes.

-Tax compliance measures to be applied in 2018:

-importers will be required to submit Letters of Credit (LC), guarantees or insurance cover from participating financial institutions before their goods are warehoused

-transit importers pay the duties on imports in Ghana which will be transferred to the designated destination country.

-deploy the Fiscal Electronic Device to VAT registered businesses. This will have the effect of VAT compliance and record keeping.

-Tax compliance measures to be applied in 2018:

-importers will be required to submit Letters of Credit (LC), guarantees or insurance cover from participating financial institutions before their goods are warehoused

-transit importers pay the duties on imports in Ghana which will be transferred to the designated destination country.

Consumers to benefit from tariff reductions 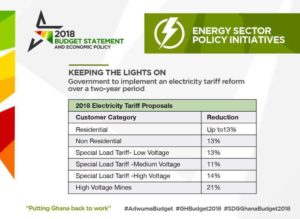 -Finance Minister says the NPP government will ensure that electricity tariff are reduced. This corroborates the President’s earlier statement. Minority hoots at Ofori-Atta as he states that government is sending a RECOMMENDATION to PURC to that effect

-Efforts will be geared towards keeping the lights on at affordable rates to consumers, particularly industries and small businesses through reform and policy interventions over a two-year period

-Government has reviewed the tariff setting methodology and cost structure of power production which has resulted in recommendations that will be made to the PURC for consideration. 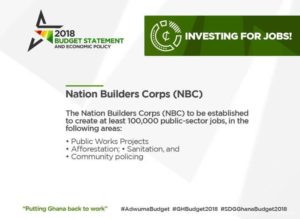 -Only 10% of our gradautes currently find jobs and the Nation Builders Corp will help in solving this program. The program will be under the Office of the President.

-Gov’t to introduce a Nation Builders Corp Program to solve public service delivery in health, and other sectors to drive, amongst other things, its drive revenue mobilization.

-Government aims to develop major infrastructure projects that support the agricultural zones of the country and industrialization agenda of Government. Under the Program government will:

-Ramp up investments under the Planting for Food and Jobs;

-Abolish duties on some agricultural produce processing equipment and machinery;

-Support the development of agribusiness start-ups through the establishment of a grant funding facility;

-Establish a GH¢400 million fund to de-risk the agriculture and agribusiness sector through sustainable agriculture financing and crop insurance schemes; 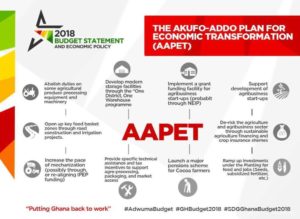 -Finance Minister’s list of roads to be constructed is met with different reactions. While the Minority sings the ‘ongoing’ chorus, the Majority says, ‘more roads’

4000 jobs to be created through digital address system 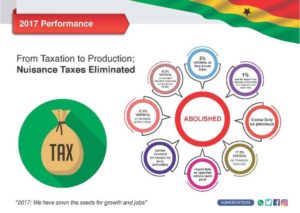 -The AG will in 2018 operationalize the office to tackle the many cases of corruption that will be brought to it. The office will review contracts/deals by government departments and agencies

-A report was submitted for the enactment of a law to establish a unified commission for tertiary education to deal with policy formulation, implementation and accreditation – Finance Minister

A section of the crowd in the public gallery 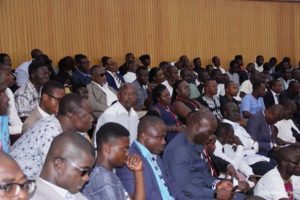 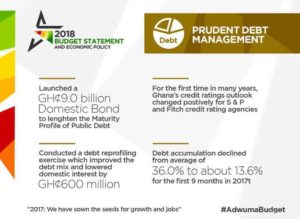 -Over the past 3 years, Cocobod awarded road contracts to the tune of GhC5.1 billion against a budget of GhC1.6 billion – Finance Minister

-Government has maintained the producer price of cocoa at GH¢7,600 per tonne, in spite of a 30 percent decline in international cocoa prices

-201,000 farmers have been registered for the Planting for Food and Jobs program – Finance Minister

-Planting for Food and Jobs has been a tremendous success. It recruited 2,160 university graduates and 1,070 youth to register and provide extension services – Finance Minister

-Fall Army Worm (FAW) invasion was successfully managed and kept under control. Through this intervention, 123,232ha of farm lands were recovered out of a total area of 137,479ha affected farms

-A total of 220 tractors and accessories comprising 141 maize shellers, 77 Multi-crop threshers were distributed to farmers and service providers to promote agricultural mechanization.

-Transfers to statutory funds and other earmarked funds which are backed by law are estimated at GhC12.1 billion – Finance Minister 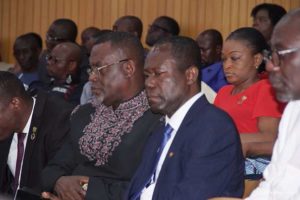 Tax measures being considered for 2018:

-In addition to empowering GRA to bring tax evaders to book, we are investing in programs and infrastructure to widen the tax net – Finance Minister

– Our government, through prudent management of the economy, reduction in the fiscal deficit and debt reprofiling, reduced Ghana’s debt to GDP ratio to 68.3% as at September 2017 – Finance Minister

-Our government, through prudent management of the economy, reduction in the fiscal deficit and debt reprofiling, reduced Ghana’s debt to GDP ratio to 68.3% as at September 2017 – Finance Minister

-As at the end of September 2017, GNPC lifted 6 parcels of crude oil on behalf of the state – Finance Minister