Eleven suspects have been arrested in connection with Monday’s robbery at Manso-Dadease in  the Amansie South District of Ashanti Region.

The all-male suspects are believed to be linked to the shooting and killing of three people including the driver of District Chief Executive for the area.

“So far, we have picked up about 11 suspects. We are going to screen them and then we will take it from there,” ACP Cosmos said.

The farming community has been thrown into a state of  mourning following the killing of three, including 60-year old resident, Kwame Danso.

The attack which occurred at about 7:40 p.m on Monday saw residents running for their dear lives, as the robbers who wore no hood fired indiscriminately.

“I was evaluating my daily sales when at about 7: 40, three armed stoutly built men entered my office uninvited.

“My safe was not locked so one of them opened it and took everything away. All the while, one of them manned the gate outside.

A crack police investigations team, led by the Regional Crime Officer, ACP Kwasi Cosmos, was deployed to the crime scene to analyse every bit of information, including inspection of the corpse.

” So far, we have managed the scene. We’ve interviewed  possible witnesses  or those who might be having information to give to the police.

“We have also come to the mortuary to come and see those who lost their lives,” he said.

It’s now that we are going to sit down to analyse the pieces of evidence that we collected so that we can see the way forward,” he added.

According to ACP Cosmos, police acted quickly to arrest the 11 suspects believed to be linked to the robbery.

“Yes obviously because we had informants, as soon as the incident occurred, we alerted our informants so some pieces of information begun trickling in.

“We had to act fast to pick up some suspects to go and interrogate them,” he said.. 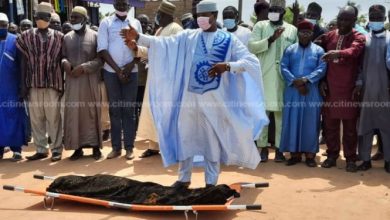