A bus driver and one passenger have been confirmed dead after two VIP buses crashed in the Eastern Region.

The two buses – headed from Accra to Kumasi to Accra- crashed when they attempted to carry out an overtaking at the Akyem-Adukrom stretch of the Asiakwa-Kyebi road.

According to the Kyebi MTTD Commander DSP Henry Agyemang, the main Bunso – Apedwa stretch of the Accra – Kumasi highway was closed to traffic on Wednesday morning following an accident on Tuesday evening involving a petrol tanker and an Opel Cardet at Asiakwa Junction which blocked the main road.

Police personnel diverted the main Kumasi-Accra road through to Kyebi in order to clear the previous accident and prevent another fatality on the road.

In explaining how the accident happened, DSP Agyemang said one of the VIP bus drivers who performed the first overtaking manoeuvre saw a sprinter bus coming from the Kumasi stretch and veered off the road to avoid a head-on collision but the second driver did not see the incoming vehicle on time.JoyNews/AdomNews · DSP Henry Agyemang speaks on VIP buses accident

Just when he did and veered off the road, he crashed into the back of the first bus, killing himself instantly. A passenger who sat behind him also died in the hospital.

Police have managed to open a portion of the Apedwa-Bonsu junction stretch of the Accra-Kumasi road in order to manage the situation and save lives.

DSP Henry Agyemang cautioned drivers to be extremely careful when driving especially in the raining season to avoid fatalities on the road. 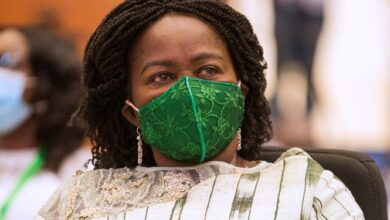