Deputy Information Minister Pious Enam Hadzide has said he will not be surprised if the University of Ghana (UG) is renamed after the late Ghanaian statesman Joseph Boakye Danquah.

There are reports that the government may soon rename UG, J.B Danquah University. This follows the renaming of some tertiary institutions in the country with the latest proposal coming from the Governing Council of the University of Energy and Natural Resources (UENR) to rename the school after Dr. Kofi Abrefa Busia, Prime Minister of the Government of the 2nd Republic.

President Nana Addo Dankwa Akufo-Addo has already given his blessing for UENR to be called the K.A. Busia University of Energy and Natural Resources, Sunyani.

Delivering the keynote speech at the 4th Graduation Ceremony of the UENR, in Sunyani, in the Bono Region on Saturday, 10 August 2019, Nana Akufo-Addo described the move as an “excellent” one.

Speaking on Accra-based Starr FM on Tuesday, 13 August 2019, about the possibility of the University of Ghana to also be renamed, Mr Hadzide said although he was not a member of the governing council he would not be surprised but rather excited if the university is named after J.B Danquah.

He said: “I’ll not be surprised, I’ve done some reading and I would actually be excited that such doyen not only of African politics, not only Ghanaian politics, but indeed international politics, a true blaze as far as the amplification of the African voice is concern. I would be quite excited that the governing council will make that consideration. However, I’m not aware that at this moment that consideration is being laid I’m not a member of the board…”

Who was J.B Danquah?

He played a significant role in pre- and post-colonial Ghana, which was formerly the Gold Coast, and is credited with giving Ghana its name. During his political career, Danquah was one of the primary opposition leaders to Ghanaian president and independence leader Kwame Nkrumah. Danquah was described as the “doyen of Gold Coast politics” by the Watson Commission of Inquiry into the 1948 Accra riots.

Danquah became a member of the Legislative Council in 1946 and actively pursued independence legislation for his country. In 1947 he helped to found the pro-independence United Gold Coast Convention (UGCC) as a combination of chiefs, academics and lawyers, including George Alfred Grant, Robert Benjamin Blay, R. A. Awoonor-Williams, Edward Akufo-Addo, and Emmanuel Obetsebi-Lamptey. Kwame Nkrumah was invited to be the new party’s general secretary. In 1948, following a boycott of European imports and subsequent rioting in Accra, Danquah was one of “the big six” (the others being Nkrumah, Akufo-Addo, Obetsebi-Lamptey, Ebenezer Ako-Adjei and William Ofori Atta) who were detained for a month by the colonial authorities.

Danquah’s historical research led him to agree with Nkrumah’s proposition that on independence the Gold Coast be renamed Ghana after the early African empire of that name. However, Danquah and Nkrumah subsequently disagreed over the direction of the independence movement and parted ways after two years. Nkrumah went on to form the Convention People’s Party (CPP) and eventually became the first president of independent Ghana.

Danquah stood as a presidential candidate against Nkrumah in April 1960 but lost the election. On 3 October 1961, Danquah was arrested under the Preventive Detention Act, on the grounds of involvement with alleged plans to subvert the CPP government. He was released on 22 June 1962. He was later elected president of the Ghana Bar Association.

Danquah was again arrested on 8 January 1964, for allegedly being implicated in a plot against the President. He suffered a heart attack and died while in detention at Nsawam Medium Prison on 4 February 1965.

After the overthrow of the CPP government in February 1966 by the National Liberation Council (NLC), Danquah was given a national funeral.

Ejisu: Family begs for help to find missing daughter after a year 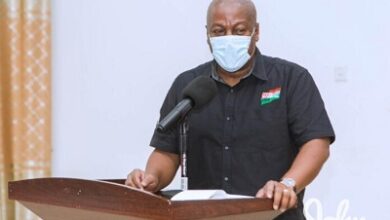