A total of 144 Persons with Disabilities (PWDs) in the Asokore-Mampong Municipality, have received cash and equipment worth GHC 179, 931 to support their businesses.

The equipment was procured from the second tranche of the District’s share of the Disability Common Fund, aimed at minimising poverty among PWDs, especially those outside formal employment in the Municipality.

It also formed part of government’s social intervention programmes to promote the welfare and enhance the living conditions of PWDs.

Alhaji Alidu Seidu the Municipal Chief Executive (MCE), speaking at the ceremony said 93 PWDs were issued with cheques amounting to GH¢103,500.00 to support their livelihoods, while 51 received equipment and assistive devices worth GH¢76,431.00.

He explained that the NPP Government had numerous support schemes in place to provide sources of livelihoods to PWDs.

Alhaji Seidu said the government had increased the Disability Common Fund from two to three per cent, while the Livelihood Empowerment Against Poverty (LEAP), a government pro-poor intervention, had also been expanded to benefit more people in the Municipality.

Madam Esther Apraku Nyarko, the Municipal Director of the Department of Social Welfare and Community Development advised PWDs to desist from begging for alms on the streets and rather use their God-given talents to engage in productive ventures to earn a meaningful living.

Mr Stephen Gyan, a representative from Ghana Federation of the Disabled on behalf of his colleagues, thanked the government and the Municipal Assembly for the assistance and urged the beneficiaries to make good use of the items. 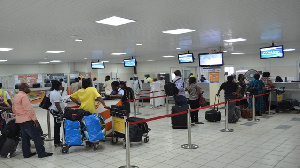