The roof of the popular Kumasi city mall has caved in, authorities there have confirmed just as happened to the Accra Mall a couple of months ago. 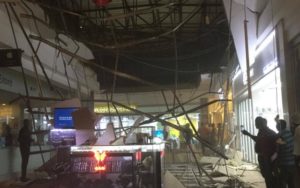 It is unclear what triggered the incident but no fatality has been recorded. 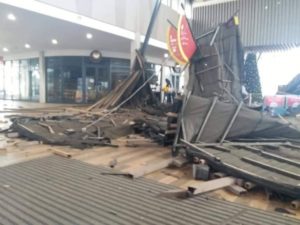 Management of the facility however say they are on top of the issue and the place will be cleaned up soon.

The mall was commissioned by President Akufo-Addo in May 2017.

Kumasi City Mall, the first world-class Shopping Centre in the Ashanti Region opened on April 20,2017 to a tumultuous reception by the people of the Kumasi Metropolis and Ghanaians of all walks of life.

The $95 million project which covers 15.4 acres of land has 74 different shops, providing goods and/or services in groceries, electronics, entertainment, fashion, lifestyle and more.

According to the eyewitness, the two persons were directly under the area that caved in.